Responsibility of a YouTuber 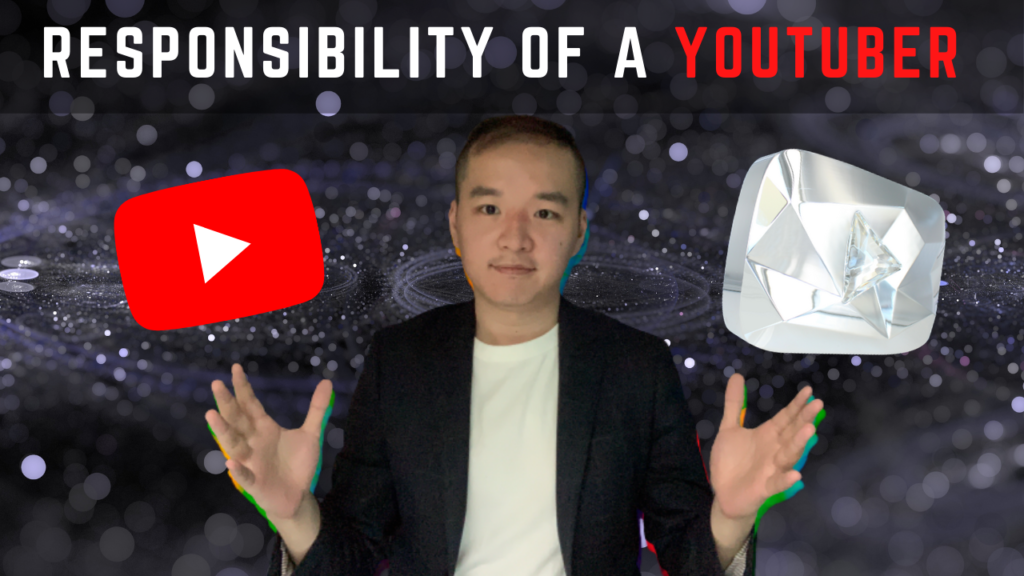 In this video, I'm going to talk about another unpopular opinion.

Some of the most important messages don't go viral and that is okay.

When you encounter a YouTuber talking about finance and the stock market, what should you expect of him or her?

Why is it important that a YouTuber should have responsibility and be aware of his own actions? What happens if a YouTuber abuses his power?

In this video, I'm going to talk about another unpopular opinion. I'm making videos because I think it's important. Not because I think it'll go viral. So it doesn't really matter because the people who are watching it, which is you are absorbing this information because some of the most important messages don't go viral. And that is okay. So let's dive into the responsibility of a YouTuber. Now in the previous video, I talk about YouTubers are scaring the public with the market crash. The problem with that is that it will lead to a self fulfilling prophecy. If you're watching my channel, Eric has a couple of thousand subscribers that is not really going to move to markets. So it doesn't really matter what I say. I can tell you, the market will crash every single day and it wouldn't make a dent in the market, but what if you have millions and millions of subscribers, and this will lead to a self fulfilling prophecy of the market crashing, and I can easily do the math to prove the point.

So let's say you have 3 million subscribers and let's say 10% of them after watching your market crash, video leaves you. Obviously, when you're looking at 3 million subscribers, there's got to be a small percentage of people that will absolutely believe whatever you say, regardless of whether it is true or not. Let's say is 10%. So that is 300,000 people. And let's say those people invest with an average of $10,000 and that is $3 billion. And that is quite crazy. When you think about it, if you have millions of subscribers and 10% of the people have $10,000 and believe what you say is true and $3 billion might be sold in the market. So when you think about a YouTuber to have millions of subscriber, they have a lot of responsibility. It's a large sum of money that can actually move to market. And in this video, I'll actually go through two ways.

A YouTube can potentially harm you, whether it is intentional or not. So the first way is penny stocks. And this is probably the most unethical and the most common approach data utuber can possibly harm you. That utuber will do his own research and decide to buy a low volume penny stock and a YouTuber. After they finished loading up the position, they will start promoting it because obviously the YouTuber is excited. The YouTuber thinks is a great investment and a YouTuber sees that it will go up 10 X, 20 X, 30 X. The subscriber base will jump in and with millions of subscribers, even if there's a 1% population that would jump in, you can see how that would affect the penny stock price because there's low volume, low price, and not a lot of shares to go around. So the price will surge after the video goes viral and the YouTuber will exit the investment goes up.

So the penny stock pump and dump is probably the more ethical version, but there's also another version that is more common, but then it's less obvious status and manipulating the market. So what they do is they would do the same thing and that utuber would recommend a stock, except this time is a blue chip company or a medium growing company. And these are not necessarily penny stocks and as much harder to move the markets. But when you think about that with millions of subscribers, they can actually still impact the market significantly. So what they will do is that they will cover blue chip stock or to medium growing company, and still tell you that it will go 10 X, 20 X, or even 30 X in the future. It's great if they are correct, but if they're not correct, you will be losing money along with them.

And when it comes to investing in the market, if you don't do your own research, it just blindly follow a YouTuber. And when you're losing money, that's when you panic sell, because sometimes you might be right. The company is great. And the price he got in is okay, but in the short-term it is going down, it was still make you feel like you made a mistake, even though you're right. So having the right mindsets to time, horizon risk management portfolio management strategy will actually help you avoid panic, selling random losses or taking a loss when you shouldn't have. Now, the second way that is unethical is that to tell you the market will crash because it is at a high, at any point in time, you can always find reasons why the market will crash. You can always blame it on something, whether it is the China housing bubble, the us housing bubble, the SMP 500 being an all time high.

That's a common one, the North American housing bubble, the inverted yield curve. If you don't know what it is, don't worry about it. And there's always reasons to blame it on something or saying something will cross a crash. And you know why? Because market crash videos get a lot of views. I can prove this because you can just look at my YouTube channel. And one of the videos I've recently published, which talks about the UV bubble crash before it actually crashed a couple of weeks ago, got a ton of views. It almost got a thousand views within 10 days, which for my small little channel that is unheard of it was growing like a rocket, which is fantastic. Turns out to be true. When you are thinking about a market crash, it is very easy to go. Firo. People want to hear, do days talk.

People want the market to crash. People want to buy in to Dorothea. So then they can panic sell and take profits or whatnot. It is actually much harder to hold onto the investments. When you think there's a probability that the market will crash. And I think that is really what separates a short-term panic investor versus a long-term investor. Because when you're a long-term investor like myself, every time there is a correction, it becomes a better opportunity to buy for great companies. Only because if you buy a company and the market crash, you're done, you're holding the bag. But if you buy a great company, then you will be protected. And that is really the key distinction. And the funny thing is you can only do this kind of risk or risk prevention for loss prevention before the crash happened. You cannot do it when the crash is happening because you would already be in a loss position.

So there's a lot of times that people are trying to invest in a risky company and trying to get away with Fitz, maybe this one time, two times for a time. And then the fourth time you get caught when the bubble crash for penny stocks or whatever. Now you lost a lot of money. And this is usually how the story goes when it comes to investing in high risk, high reward stocks. And the third point is really around my opinion on market crash. Now in the previous video, I already told you three main reasons why I don't think the market will crash. So you can always refer to that when it comes to a market crash and needs to be something that is a systematic failure in the economy. And what does that really mean? It means that's a system needs to be broken in a certain way.

After the housing crash, people become much more aware of housing prices and potentially crashing and how the banks are giving out mortgages. So as much harder for the housing market is to crash again. The next one is really COVID and now people are much more aware of diseases and being more sanitized or what not. So this will actually make it much harder to crash the economy with a disease. And when it comes to investing, my target is really to make 30% a year. And this seems like a very audacious goal. And that is because the market on average only goes up by around 10% to 8% a year. My strategy builds on an interesting concept, which is the market crash. Whenever there's a market crash is going to be different every single time, which requires the investor to have some form of judgment and some form of opinion of the future.

So if you want to learn more about my strategy, that you can go grab it on my website, which is five minute investing.com/free case study, it is a four hour webinar where I outline how I invest in the market. So on and so forth. So you can take your time, grab a cup of coffee, and you can watch it. When you think about my strategy market crash actually plays an important role because I focus on this counter stock. So I like to invest in stocks at a discount contrary to investing in the ed when the is hot investing in gene editing. When gene editing is hot until the ed bubble bursts, and a lot of people lose their money or whatnot. So basically I do the opposite of what most people do when it comes to investing and for investing a celebrator this month, I'm looking to help another 20 professionals without a financial background to master investing and target 30% return a year.

So if you're interested in joining the program, then go watch the free case study. Then you can schedule a call with me, we'll have a one-on-one chat to see if you're a good fit for the program. And if you are, then I'll help you enroll into the program. And in terms of investing accelerator case studies, this time we have Bruno made 60% from chef in two weeks beyond made 70% from chef in four months and area and made 70% from American express in one week. So these are fantastic returns, congratulations to Bruno and area. And in the next video, I'm going to make another unpopular opinion video on how to lose money with any strategy I noticed for a long time. But I didn't think it was that important until I started to see some people that are experiencing a similar issue. And you might be thinking, well, Eric, how do you lose money with any strategy?

If a strategy works, wouldn't you just make money. And that is really, what's interesting about this video. And again, I don't think it's going to be a viral video or whatnot, but it's an important video. So it might not reach a lot of people, but the people who watch it will get a lot of benefit out of it. And I think that was really the paradox of making YouTube videos, because on one hand I make important videos that are crucial when it comes to investing. Instead of telling you that the market will crash tomorrow, versus making viral videos that get clicks and views, my focus is important videos, and you want to learn how to lose money with any strategy, because if you know how to lose money, then you know what to do to not lose money. And that is really perhaps the secret to investing. So I'll see you in the next video.