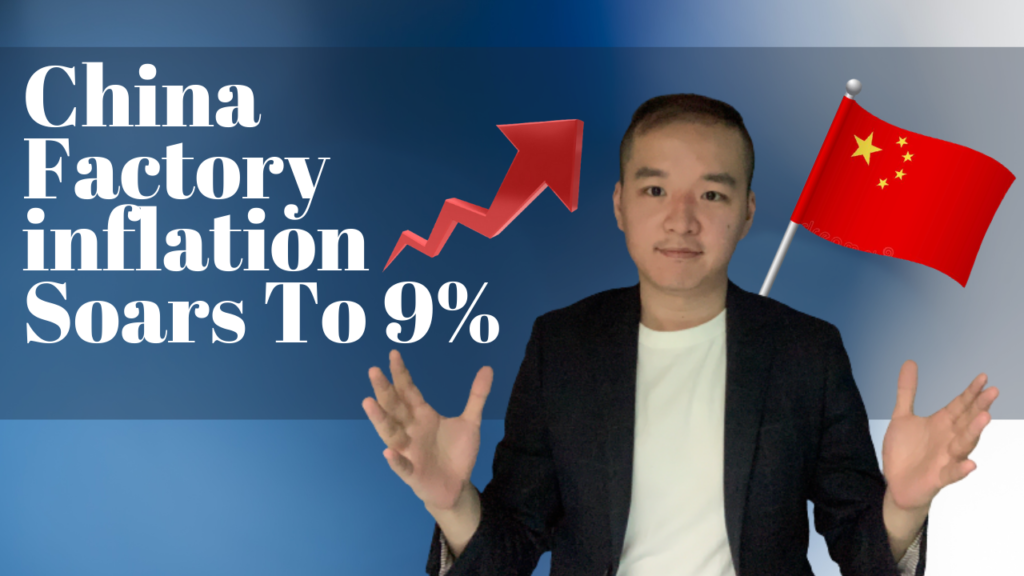 This video is the second part to another video I have made previously.

In this video, we will talk about how China's inflation boom will impact our lives, how to interpret the data, whether or not that is good or bad news, and how to think about it going forward.

China's inflation will have a lagging impact and drive up the prices of raw materials and commodities which will be explained in this video.

So hello everybody. My name is Eric and I'm a CPA. So in this video, we're going to talk about inflation again, and this is actually a followup video to the previous inflation video I had. And this time we're going to talk about China factory inflation sourced to 2008 high on commodity. Boom. We're going to talk about how that impact our lives, how to interpret the data and whether that is good or not, and how to think about it going forward, because it has a legging impact. And you're not going to see that immediately, but you will see the impact of the inflation from China very, very soon. Now, if you're interested in watching the previous video, so we talked about the food prices increased globally. We talked about the number of markets, and we also talk about the housing market as well. So if you want to go back to watch the first video you can click like and subscribe, and it should be in your recommendation somewhere as well.

So back to this article now, before we get started, I just want to celebrate another three successful case study from investing a celebrator where Aaron made 59% from Sienna in 52 days, Mary made 105% from play in six months and he won, made 50% from Boeing. So congratulations to you. Three, these are very awesome and successful traits. So let's talk about production inflation. So producer prices rose 9% year on year in may. And the estimate was actually 8.5%. If you were thinking about printing money should have an impact on the economy. Now you're seeing it. And let me just go down here and here is the charts from Bloomberg. And if you look at the production producer price index, which is the white line here, and you will see that, okay, historically it kind of ranges between zero to 5%, maybe sometimes even negative five, but right now it actually exceeded the 5% and heading to this 10% region.

And when you think about it, the last time that this happened was actually after the crash in this, um, oh nine, 10 range, and then it stayed above 5% for two to three years. So I think what we're expecting right now is that, uh, raw materials, commodities are getting more expensive and eventually that should get passed on to north America. So based on my experience with logistics, usually there is around a three to six months leg because obviously it takes time for goods to be produced and then shipped over, which will take two, three months and then arrive in north America, had your local grocery store and supermarket. So even though you don't see the impact today, it is coming in a six to nine months. Now, if we scroll a little bit, then we can read a little bit more about the article. So commodity prices have rallied this year, prompting Chinese policy makers to targets steps to curb soaring prices, including price control on coal.

So this is the article they're talking about. China considers imposing price control on surgeon, coal markets. And based on my understanding, they actually have a couple of other policies to maintain commodity prices, to be low as well. And when you're looking at China, it is a centrally managed government so that they will try to stabilize the market as much as possible. But given that the EU has been printing money, us Canada, they have all been printing money and China has been printing money as well. They don't say they do, but they do print money. So I'm not quite sure how they're all going to resolve this issue because when you look at a market and there's an increasing money supply, but if the production stays relatively the same and a higher demand, then the prices are going to go up. Now, this is actually quite an interesting chart here.

You will see that prices for coal and previously in 2020, it used to be between 500 to $600. And now it's closer to $800. So you can imagine this is a 30, 40, 50% increase. And if coal, which is energy use to produce goods has increased the production company. Manufacturers have to bake that into the future price. So this means there will be a price increase for all goods, basically, because if they use coal, there's probably going to be an increase in costs and increase in price as well. So let's go back to this article. So if we go down here, um, what the charge you're seeing right now is the gap between factory inflation and consumer inflation. And what this is trying to measure is really what is the leg between increase in production prices and consumer prices? So if there is a gap means the production cost is increasing right now, but it's not reflected in the consumer market yet. So that's what you will see right here. So previously, um, it was near 0% or what not. So you can see it here between this 2006, 2007 period and an afterwards, right now there's a 7.7% difference. Meaning that the goods that are purchased today using a contract will hit the market in a couple of months with a seven to 8% increase. And right now we don't know what the, what the, the top is yet because price has not stabilized. So it might even reach 10% in the near future in a couple of months.

So we'll continue on. And the reason for it, a production price increase is really due to the global recovery. People are coming out to spend more and basically higher demand and of course, money printing as well. Now, if we scroll down a little bit in the article, then you will find one of the interesting quotes from the Bloomberg economists. So the people's bank of China sees inflationary pressure has transitionary in our view. Now this is quite interesting because if you're looking at the us side, they're also saying that inflation is transitionary is temporary, and eventually it's going to be gone. And in my opinion, I think this is more of a way to give comfort to the market. So basically people don't panic like back in 2000 where there's the market crash. And previously I did cover inflation and a tech correction as well in terms of how that impacted the 2000 correction.

And when there is inflation, then the interest rate will go up, which means people will need to pay more interest on their mortgages and corporations will need to pay more interest on their loans. So on and so forth, which will lead to a higher number of bankruptcies and defaults. And that's actually what happened in the year 2000 when there was a tech correction, because people got really worried, the companies that they invest in might default. So instead they just exited their position, which led to the.com crash. So finally, near the end of the article here, you'll see the consumer price index and food prices has not really gone up that much yet. And you see pork CPI, which was previously impacted by the, uh, the flu. There was actually a reduction in pork supply in China, and now the prices have technically gone back down a little bit, but I think this chart is not exactly very representative because the pork range is so high that you're not able to truly see what's happening with the consumer price index.

But I think we should be fairly confident that there is a leg in terms of the consumer price index. And you wouldn't see the increase until three to six months later. And if you're interested in learning more about investing and you can go to the link below and sign up for the free webinar. So that's where we'll go through how to invest in the markets. How do you use this kind of information like inflation, uh, CPI to invest in the markets. And this month I'm looking to help 20 professionals without a financial background to master investing. And in the next video, I'm going to talk about AAA and how they are raising prices as well. So it's going to be another inflation related video. So stay tuned.